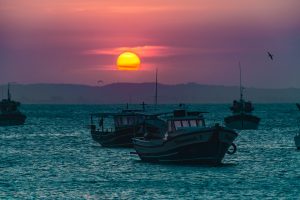 Secretary of State John Kerry weighed in saying “We want to bring to the public’s attention the full nature and scope of a $150 billion illicit trafficking industry,” he goes on to encourage the public “Pick up today’s New York Times, front page story about a young Cambodian boy promised a construction job in Thailand, goes across the border, finds himself held by armed men, and ultimately is pressed into service on the seas, three years at sea shackled by his neck to the boat.” The young Cambodian he was referencing was Lang Long a Thirty-year-old man who has become the face for the horrors of this industry.

Most of the fish caught on the boat that Lang Long was held captive ended up in the Songkla Canning Company, which is a subsidiary of Thai Union Frozen Products, Thailand’s largest seafood company. The Union has shipped millions of pounds of seafood-based cat and dog foods for top brands like Iams (owned by Mars Inc.) and Fancy Feast (owned by Nestlé). It is not clear when the slave labor will end but, lawsuits against these companies in addition to politicians speaking out is raising awareness and in time will help put an end to slave labor in the commercial fishing industry.