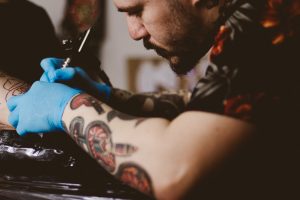 Much like painters or musicians, tattoo artists are creators in their own right.  However, are their inked canvases considered unique designs worthy of copyright protection?  Solid Oak Sketches seemed to think so, as the company filed a lawsuit against producers of NBA 2K video games, including Take-Two Interactive Software.  In 2016, the tattoo licensing firm accused NBA 2K of embodying athletes such as LeBron James, Eric Bledsoe, and Kenyon Martin with their real-life tattoos in the video games, without properly compensating the artists who tattooed them.  That lawsuit, initially filed in a Manhattan court, was just dismissed this month.

The plaintiffs provided a sound argument behind what constitutes a copyrightable work of art.  For one, tattoos are a type of drawing or sketch, defined under one of the criteria of the Copyright Act of 1976.  Tattoos are also positively recognized as new and inspired forms of expression, tangibly visible on the body of the person tattooed.  The tattoo is present to the eye.  Based on the listed categories under which a work is considered deserving of copyright protection, the plaintiffs in this case developed a seemingly strong case.

While artists may claim ownership of their tattoos, individuals whose bodies are offered as the murals to these artists may see themselves as the owners of the tattoos.  LeBron James, in particular, responded in favor of the defendants in this lawsuit, stating that his tattoos are characteristic of his identity.  The absence of his tattoos in the video games would provide an inaccurate representation of his player.  The judge assigned to the case ruled in favor of dismissing the plaintiff’s claim, rationalizing that because the tattoos are not included in the marketing of the games, they are not used for profitable gain.  The tattoos displayed within the games are so tiny on fast moving players, that it is almost impossible to detect or even distinguish the tattoos.  That leaves video game makers in the lead, ahead of tattoo artists, 1-0.