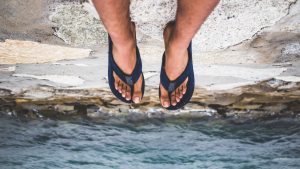 Bernardo is a household name for luxury designer footwear.  Currently, this company has made a name for itself as “plaintiff” in several patent infringement lawsuits, centering around the design of their ornamental thong sandals.  Since obtaining the patent in 2008, Bernardo and its parent company JPT Group have filed eleven lawsuits against other shoe and lifestyle brand companies.  Some of the eleven companies Bernardo has taken legal action against are Old Navy, Famous Footwear, Balenciaga, and Pedro Garcia.  Most recently, the company has accused Tory Burch of infringing upon their intellectual property rights.  In particular, the Tory Burch Emmy Pearl Sandal closely resembles the design of the Bernardo thong sandal.

In the lawsuit, filed at the beginning of June, Bernardo and JPT Group are asking for an injunction that would require Tory Burch’s production of the sandals to cease.  They are also requesting a jury trial and compensation for profits acquired from the sale of the sandals and other damages.  When compared, the Tory Burch sandal and the patented Bernardo sandal do look similar.  Both designs have a skinny thong strap, decorated with beads or other ornaments, and another thin strap securing the back of the ankle or heel.   On either side of the sandal, single straps secure the back strap to the base of the shoe.

Such as in this present lawsuit, in the patent infringement lawsuit filed against Old Navy in 2014, Bernardo and LPT Group argued that Old Navy was fully cognizant of their infringement, but continued to sell their sandals.  The lawsuit referenced two styles of sandals sold by Old Navy.  In both examples, the comparisons are evident.  The reason why Bernardo was successful in this lawsuit, and why the company may be triumphant in the Tory Burch lawsuit, is the patent law that protects the sandal’s attractive appearance, regardless of structural similarities.  Bernardo objects to the claim that these sandals are the original design of any other company that is not Bernardo.