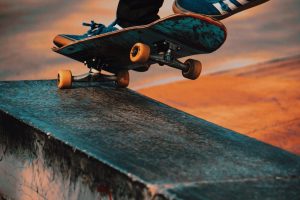 The description of a downhill skateboarding event, in and of itself, radiates a slight level of danger. There is always a risk of injury in traveling downhill at elevated speeds, with only a board and four wheels serving as an unprotected and
exposed form of transportation. In July 2017, a San Francisco police officer pushed a vulnerable skateboarder during an annual competition. The supposed intentional action of the officer was captured on multiple video outlets.

In the video that went viral, it is apparent that the police officer positioned himself in the line of transit of the competition. As 19-year- old Anthony Economus approached the officer at an accelerated rate, the officer nudged the skateboarder with his left shoulder. The speed at which Economus was traveling made the force behind the officer’s impact even more powerful.The contact sent the 19 year old flying off of his skateboard and into the air, flipping over the police officer’s car, and hitting the pavement. The injuries sustained include 13 stitches, a broken ankle, a sprained wrist, and torn ligaments in the knee.

Economus, who was 19 years old at the time of the incident, has recently filed a civil lawsuit in response to the police officer’s actions and the subsequent injuries from which he suffered. The skateboarder is holding the city of San Francisco responsible for this alleged reckless and intentional action of one of their police officers. Economus believes the shoulder nudge inflicted by the officer was not accidental, but was rather malicious.

Regardless of the intentions behind the act, the fact remains that the event held near Dolores Park was an unpermitted event. A similar race held the previous year was a sponsored event, with little conflict. The turnout in the 2017 event was much different. The purpose of the police presence was to ensure safety in a growing crowd; however, the collision of the police officer and Economus resulted in a chaotic response. The crowd vandalized two police vehicles and threw miscellaneous objects at the police.

Perhaps the eventual outcome of this lawsuit, initiated by Economus, will pave the way for a safer relationship between the police and downhill skateboarders.