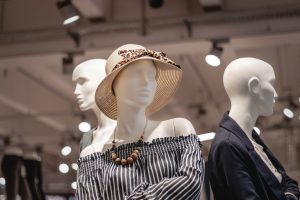 Not dressed for the job

Applying for a job and competing with an ever increasing pool of candidates is an arduous task, let alone the consideration of all of the other subject matter that could potentially factor in.  We all know that personal and professional connections help a great deal when searching for a job, but what about the instances where you are a complete stranger to someone and have to convince them that you are the right fit?  Getting past the paper resume stage is hard enough, but then comes the face to face meetings and interviews.  An individual has to prove that they are compatible with the company culture, create a good personal connection with the person interviewing them, and then just hope that they did enough to stand out against all the other applicants while not doing anything to jeopardize their prospective status.  What happens when you do everything right and still get an undesirable result?  Such seems to be the case for Samantha Elauf, who claims she got denied from a job at Abercrombie & Fitch for wearing a religious black headscarf (Hijab) as an exhibition of her Muslim Religion.

An article by the Associated Press states that Samantha Elauf “impressed the assistant store manager with whom she met, but her application faltered over her headscarf because it conflicted with the company’s Look Policy, a code derived from Abercrombie’s focus on what it calls East Coast collegiate or preppy style”.  Supreme Court Justices ruled in favor of Samantha Elauf, further strengthened Federal Civil Rights Laws, aka Title VII, which prohibits employers from firing or hiring individuals based on religious practices.  There are many gray areas associated with burden of proof, as well as whose responsibility it is to determine whether accommodations need to be made.  Samantha Elauf did not specifically disclose that she was Muslim, but Judge Scalia posits that Abercrombie “At least suspected” that she wore a headscarf for religious purposes, and that should be enough of a reason to warrant a conversation for needed accommodations.

Although the Supreme Court’s decision to side with Samantha Elauf does not guarantee any favorable results, it does suggest that the majority of the burden does rest with employers and how they handle potential hiring decisions.  It will force them to inquire and dig deeper about personal situations and individual preferences of potential employees, making them more susceptible to lawsuits pertaining to civil rights and freedoms.  In this particular circumstance, I can see both sides having equally compelling arguments to make.  Decisions for a company like Abercrombie are made from the top down, leaving the hiring managers little room for error.  If company policy states that they are looking for a certain person to fill sales roles based on an image it is trying to sell, then the individual doing the hiring is only trying to do their job without getting in trouble.  On the other hand, a perfectly qualified individual should not be disqualified from opportunities based on religious preference as long as they can perform the duties of the job.  Ms. Elauf will be heading back to court, as her case will “return to the 10th U.S. Circuit Court of Appeals in Denver, which earlier ruled against her”.  In cases such as these, I personally feel that it is hard to prove intent on the hiring company to deny an applicant based on religious discrimination.  I do not personally know whether or not she was denied employment for these reasons, but conversations did not appear to take place where the need for special accommodations were discussed, which seems to be pretty vital in determining a deeper intent to deny employment base don religious preference.  When all is said and done, I hope situations like this become less of a cause for concern, that an individual employee is judged on their merit and performance, and much less on their outside appearance or individual differences.  Employers and employees both have deserved rights within society and culture, the toughest part is finding a happy medium between the two sides where each party feels respected and understood.