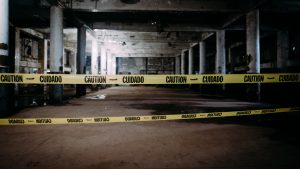 A decrease in mall security may have lead to carjacking, leaving NJ man dead.

The widow of carjacking victim Dustin Friedland is filing suit against The Mall at Short Hills. Her husband was shot and killed during a violent carjacking that took place in the mall parking deck on December 25, 2013. She is alleging that the owners of the upscale shopping mall located in Short Hills, New Jersey put profits ahead of security when they sidelined off duty police officers several years ago. Jamie Schar Friedland is requesting an unspecified amount in damages after the tragic loss of her husband. Also named in the suit are security contractors, the mall’s general manager and first aid squad.

The Friedlands were leaving the upscale shopping mall when they were confronted by two armed men as they were getting into their 2012 Range Rover. Dustin Friedland was shot in the head and died at a nearby hospital later that night. His widow, Jamie Schar Friedland is alleging that the mall and security contractors failed to hire police officers in an effort to cut cost and increase profits. The suit goes on to state that at the height of the holiday shopping season carjackers are on the prowl at high end retail locations and that proper security measures were not taken in this case. Friedland’s lawyer states that the mall’s owners knew the mall was ripe for carjackings due to its assortment of high end stores and clientele. The suit claims that emergency responders took too long to get to Friedland once the 911 call had been made. They were then further delayed when the ambulance was unable to fit under the parking deck, forcing responders to wheel the stretcher up to Friedland then back down to the ambulance.

The mall’s general manager, Michael McAvinue has reportedly said that police were on patrol the night Dustin Friedland was shot. He could not be reached for comment. The Representatives for The Essex county Sheriff Armando Fontoura, told The Star Ledger that the Mall at Short Hills stopped paying his officers to patrol the mall 2-3 years ago. He said the mall regularly used off-duty sheriff’s officers to patrol the parking deck and other areas. “I think that if there had been a highly visible, well-trained police officer there being vigilant, I think it prevents a lot of stuff,” Fontoura said at the time. “It doesn’t allow for murderous thugs to sit and lie in wait and to case the place for days” (Zambito, 2014) The four men involved in the carjacking have all been arrested and are facing murder charges.