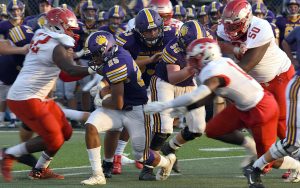 The lawsuit covers the yearly range from 1968 to 2008. The main problem the lawsuit will have proving is cause and effect between the drugs and the present symptoms the former NFL players are going through. Also, the players would have to prove that their problems are greater than other people the same age as themselves. Players were never notified they were actually injured and instead were given painkillers to mask the pain.

For example, Jim McMahon, quarterback from the 1985 champion Chicago Bears, stated he was never told about broken bones and was fed pills instead. Also, Jeremy Newberry, former lineman in the NFL, stated he would see teammates and opponents during warm-ups with blood stains on their buttocks. This was a telltale sign the player took a pre-game injection to mask the pain they were suffering.