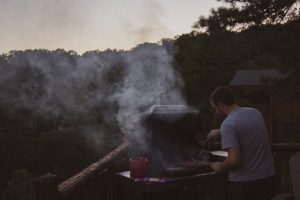 Alleging false advertising, two consumers of Traeger grills are accusing the company of selling wood pellets that are not in accordance with the “All Natural Hardwood” claim on the product label.  Small traces of food-grade soybean oil are added to the pellets to provide enhanced flavor and grease.  The plaintiffs, Michael Yates and Norman Jones, argue that only 1/3 of the wood is comprised as advertised, leading them to pay above market value price for the pellets that are, according to their dispute, not entirely natural.

The purpose of a Traeger wood pellet grill is to develop smoke rather than placing food over a direct flame.  The company contends that their business methods and product supplies have remained consistent for the past sixteen years. The original owner of the Traeger grill, established in 1986, sold the company in 2006, and the company was sold again in 2014.  Although the company sells 14 different types of wood for the pellets, some of the flavors in question include hickory, apple, mesquite, pecan, and cherry.  Synthetic flavors are included to endorse any potentially muted aromas.

This action is what Yates and Jones may consider deceptive business practices.  Given the presentation that consumers are purchasing an all-natural product, they may be willing to pay the mark up in value.  However, contemplating the recent discovery that the pellets are enhanced with oils, the value of the pellets purchased arguably decreases.  Despite the filing of this claim as a class action lawsuit, a Utah district court judge failed to see the qualification of this case as a class action. Other than the two plaintiffs involved, a significant class of claimants has not been established.  Subsequently, the case has been dismissed without prejudice and may be tried at a later time, in a different court.