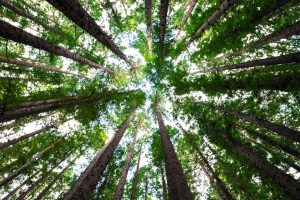 There is an old philosophical argument that goes as follows: If a tree falls in the forest, and no one is around to hear it, does it still make a sound? A recent lawsuit in Michigan is finally providing an answer: Yes. Residents of Bloomfield Hills, MI have taken up a class-action against tree removal by the power company DTE Energy. Reports say they hired a tree-trimming company to take trees down in a short period of time without giving notice to the community. The power company was worried about the trees interfering with cables they had been running in the area, and had petitioned to remove them. Clearly upset by the secretive manner in which DTE went about this deforestation, the people living in Bloomfield Hills are now seeking $54 million in restitution.

Power outages in the area forced DTE Energy to come up with an alternate strategy to make sure they could supply their customers with good service. Academy of the Sacred Heart, a school in the area, was particularly upset as they lost some trees amongst their 46 acres. There seems to be a fine line between citizens who want their power to work fluently without outages, but also prefer to keep the trees growing tall, healthy, and uncut. Many people in Bloomfield Hills are upset at the fact that not all of the trees are actually removed, rather awkwardly trimmed and cut randomly to avoid the power lines. Lawyer Geoffrey Fieger is assisting the community with the lawsuit, and the case was filed in Michigan’s Oakland Circuit Court.

What a mess. You can understand both parties’ point of views in this situation. Deforestation has always been a big issue, but the main problem here is that trees could be causing dangerous situations for the community. With bad weather frequent in Michigan in the fall and winter, it seems that safety has to come first. Ideally there would be a solution that does not involve the total removal or unsightly trimming of the area’s natural trees, such as running the power cables underground. That itself is an expensive endeavor, and one that Michigan’s struggling economy could probably not support. Until then, maybe the residents of Bloomfield Hills need to see the forest for the trees.