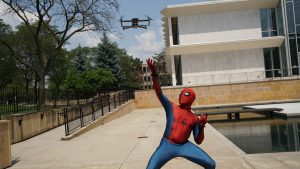 The 95-year-old creator of popular super hero franchises such as Spider-Man, X-Men, and The Avengers has filed a billion dollar lawsuit against a Chinese company. Stan Lee, the former editor-in-chief of Marvel Comics, is claiming that Pow Entertainment duped him into signing over his likeness, naming rights, and creative properties. The lawsuit was filed in a California court and named his former business partners, Gill Champion and Shane Duffy, as those responsible. When reached for comment, the defendant’s responded saying that the accusations were “preposterous”. Pow Entertainment was sold to a Hong Kong-based firm in 2017. This is the latest in a series of unfortunate events for Lee, who had his identity stolen late last year when a condo in Los Angeles was sold for almost $900k, with Lee claiming that almost $5m has gone missing from his bank account over the years. END_OF_DOCUMENT_TOKEN_TO_BE_REPLACED

If you are a child during the holiday season, there may be no better gift than a brand new Spider-Man toy. However, it appears that a trademark lawsuit may keep some Marvel merchandise off the shelves. A man named Stephen Kimble invented a toy glove that fires silly string, allowing kids to pretend they are the web-slinging hero Spider-Man. Marvel bought the idea and had been paying Kimble royalties from sales, until his patent on the idea ran out. Furious, the inventor filed a lawsuit to overturn a 50-year-old Supreme Court ruling about expiring patents, seemingly forcing Spider-Man to trade in his red-and-blue spandex for a suit and tie. END_OF_DOCUMENT_TOKEN_TO_BE_REPLACED