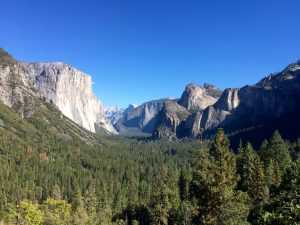 The weight of a name

Located in California’s breathtaking Sierra Nevada mountains, Yosemite National Park is home to gigantic sequoia trees, granite cliffs, and impeccable landscapes.  In addition to these attractive tourist spots, the iconic national park has also been the subject of legal trouble since 2015.  Delaware North Companies Inc had maintained park property operations since 1993 until it was outbid by Aramark.  As part of the concessionaire’s transition into their new role, Aramark changed the names of several attractions and hotels.  In the lawsuit, Delaware North claims that Aramark should have had to uphold terms that were required when Delaware North began operations in 1993, which was to purchase the previous facilities operator’s intellectual property rights of the names.  As compensation for this intellectual property dispute, Delaware North was looking to collect $50,000 million.

This money would allow the continued use of the new operator’s trademark changes. Several past and frequent visitors, however, opposed the new names.  The old names elicited fond, exciting memories in the minds of guests, who spent time in the lodges, on family vacations, during honeymoons or christenings. Altering the names of these iconic places in Yosemite National Park would essentially be changing American history. The Ahwahnee Hotel was changed to The Majestic Yosemite Hotel.  Big Tree Lodge replaced the Wawona Hotel.  Curry Village transitioned to Half Dome Village, and Badger Pass Ski Area became Yosemite Ski and Snowboard Area.

In order to preserve the names associated with all of Yosemite’s incredible attractions, all parties involved in the lawsuit agreed to settle.  Aramark arranged to pay Delaware North $12 million to use the old trademarks until the end of their contract in 2031.  At that point, the intellectual property rights would revert to the federal government. Following Aramark’s contract, no other outside vendors will be allowed to claim ownership of the names.  The original monikers from years past will be preserved and the memories of so many visitors will be left untouched and unchanged.