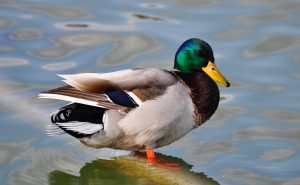 In May of 2012 a woman was visiting her mother in Oregon when she was ambushed by a neighbor’s pet duck. The Huffington Post states, “Cynthia Ruddell, 62, of Washougal, Washington, was on her mother’s property in Estacada, Oregon, about 25 miles southeast of Portland, when a neighbor’s duck attacked her without provocation, according to the suit filed in Oregon state court last Friday”. When attempting to run away from the agitated animal, Ruddell fell, breaking her wrist and spraining her elbow and shoulder. The retired nurse is seeking up to $275,000 in damages. Roughly $25,000 is for medical expenses, while the remainder is for pain and suffering that she has endured because of the incident.

“The complaint accuses the bird’s owner, Lolita Rose, of failing to maintain control of her pet or to warn or otherwise inform neighbors of her duck’s dangerous propensity in attacking individuals”. Lolita Rose was unable to be reached for comment on the situation. It is speculated that Rose had the animal killed after the incident with Ruddell. It is believed by Ruddell’s attorney that the damages will be paid by Rose’s insurance policy. Ruddell’s attorney also states that his client has received a large amount of unwanted attention because of this case. Ruddell’s attorney states, “I’ve learned a lesson,” he said. “In any future lawsuit I’ll talk about my client being attacked by a domestic animal. Not by a duck”.

It seems there has been a large influx of comments because of this dangerous duck lawsuit. Based on information provided, Ruddell wasn’t actually injured by the duck, but rather tripping and falling trying to get away from the duck “ambush”. It seems many have wanted to provide their two cents on the incident, which is adding to the pain and suffering caused by the victim of this vicious attack. “Filing a lawsuit was necessary as a precaution because of continuing medical bills from a second surgery on his client’s wrist and a two-year statute of limitations on such claims”.