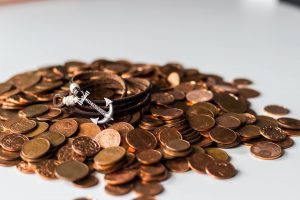 The ex-wife used the $50.12 to purchase the three containers and included a receipt stating “The receipt is included if you want to return them…” And if that wasn’t bad enough, the ex-wife included a goodbye letter to add some salt to the already opened wound posted on Reddit.com by the husband.

So if you were going through a divorce and financial settlement with your ex-spouse, how would you feel if you received your settlement money and it was all pennies? Would you make a laugh out of the situation or would you knock over the container of pennies in frustration?

If I was the ex-husband going through this divorce and financial settlement battle, it would be more frustrating to me to turn the $47.12 into cash and take the plastic containers back to the store for a refund. Actually, I would save the containers for something useful like storage. I mean, those containers are pretty deep and think of it this way…”It’s a nice going- away present.”