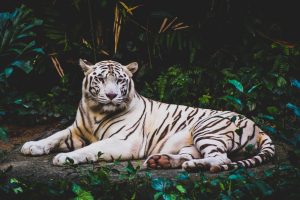 Many people enjoy visiting their nearest zoo and seeing all types of exotic animals. Having said that, there are those who oppose keeping some of these creatures in captivity. In situations like these, you may think that a lawsuit would be brought against the zoo itself or a governing body that manages the park. This time, a defamation lawsuit was filed against the Animal Legal Defense Fund by Landry’s Inc, the company running a Texas-based aquarium who happened to own four white  bengal tigers. Landry’s claimed the ALDF was bringing false accusations regarding animal safety against them.

The lawsuit was quickly dismissed by Harris County judge Steven Kirkland. His decision ordered Landry’s Inc to not only pay the legal fees for the Animal Legal Defense Fund (totaling $175,000), but also an additional $450,000 in penalties. Prior to the defamation lawsuit being filed, the ALDF claimed that the tigers had not been outside in about 10 years and were subject to poor treatment by the aquarium. With strict laws in place about the living conditions for animals in captivity, Landry’s immediately fired back and attempted to take the California-based activist group to court. The four tigers, Coral, Marina, Nero and Reef, could not be reached for comment.

While animal safety and fair living conditions are no joke, it seemed a clumsy move for Landry’s to engage with the Animal Legal Defense Fund. While it is unlikely that the tigers had not seen the light of day for a decade, as the ALDF claimed, bringing more attention to the matter may have not been the smartest move. Still, it is refreshing that companies are willing to go the extra mile to make sure that animal rights’ laws are being adhered to. While zoos and aquariums are fun places to visit, the issues of health and safety for the animals is of the utmost importance. Hopefully the tigers are enjoying a happy life of leisure, and the zoo is more like a retirement home than a prison cell.