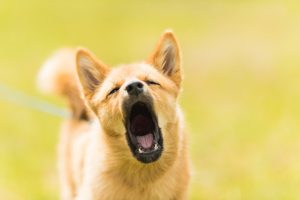 Everyone has been woken up by a clap of thunder, loud noise or dog bark; but little did we know that a dog’s bark were grounds for a lawsuit. Woodrow Thompson, a local Seattle, Washington homeowner, recently sued his neighbors and their dog Cawper for $500,000. In the suit, Thompson claims “profound emotional distress”, in which he outlined in a 36-page manifesto.  Thompson’s complaint suggests Cawper is capable of barking at 128 decibels through double pane windows. According to Purdue University research, that would mean Cawper is louder than a chainsaw, a clap of thunder and just a hair quieter than the takeoff of a military jet.

And in the strangest turn of events, Thompson won the case.  The defendant, Denise Norton,  thought the subpoena to court was a hoax, and never even went to the hearing.  Due to the no-show, Thompson won the case, by default.  Due to the frivolous lawsuit, Ms. Norton is at risk to lose her home. Ms. Norton filed an immediate appeal , hoping to overturn the original decision.

Norton says she takes full responsibility for not responding to the suit, but she’s now working to reverse the decision. So began months of finally going to court to try to unravel the judgment after the lien became official. Norton claims to have sufficient evidence to overturn the decision when the appeal hearing takes place, but a date has yet to be set.  In short, never dismiss any legal paperwork, no matter how ludicrous they may seem.  Also, try and keep open communication lines with your neighbors, as it may seriously cost you in the end.