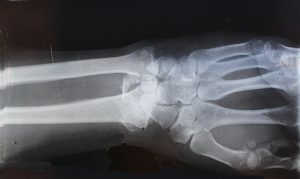 According to The Washington Post, on July 4th, 2015, Jason Pierre Paul, The New York Giants star edge rusher, was involved in a fireworks accident that severely damaged his right hand.  In fact, the injury was so severe, that it led to the amputation of 1 digit, and multiple surgeries and grafts.  While in the hospital, there were many questions swirling the event, including the actual severity of the incident.

With press engulfing the hospital grounds seeking definitive answers, an ESPN analyst, Adam Schefter, released an image of Pierre-Paul’s medical chart via his Twitter account.  The image of the chart was supplied to Adam Schefter via a Jackson Memorial Staff employee, whom has since been relieved of their duties.  The image did in fact verify the surgeries performed, and supersede the wishes of the Pierre-Paul family.  A statement by Jackson Memorial indicated that the parties at hand had reached a settlement with the Jason Pierre-Paul, and it said “protecting the privacy of our patients is a top priority at Jackson Health System.”  While Jackson Memorial were the HIPAA violators in this situation, the more imperative suit comes against Adam Schefter and ESPN.

While Adam Schefter was not himself in violation of the Health Insurance Portability and Accountability Act, new reports came to light that Pierre-Paul had filed an invasion-of-privacy lawsuit against Schefter and ESPN.  Pierre-Paul initially filed the original motion in Florida courts, stating “This action arises out of ESPN reporter Schefter’s blatant disregard for the private and confidential nature of plaintiff’s medical records, all so Schefter could show the world that he had ‘supporting proof’ of a surgical procedure.”

JPP is asking for a minimum of $15,000 in damages, not including court costs and fees.  Adam Schefter later admitted to Sports Illustrated, “In hindsight I could and should have done even more here due to the sensitivity of the situation.” He added, “On this one, there should have been even more discussion than there was due to the sensitivity of the story; that’s on me.”  The decision of this lawsuit will set precedence in the near future in regards to the freedoms and allowances of the media and press.