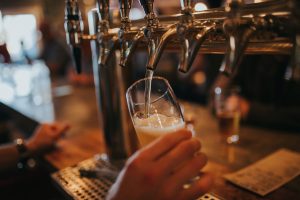 “Ricky Bobby Sports Saloon & Restaurant” is a publically traded corporation and subsidiary of Ricks Cabaret International. The restaurant features a full-size replica of a race car that is nearly identical to the Chevrolet Monte Carlo driven by the Ricky Bobby character in the movie. There are displays and pictures with the phrase “if you ain’t first…” which Sony says is a direct reference to a Ricky Bobby lifelong mantra “if you ain’t first, you’re last”. Drink items include “Talladega Punch” and “Comin at ya like a Spider Monkey” which is a line in the movie. The lawsuit cites an article featured in The Dallas Observer as evidence that the restaurant used “Ricky Bobby” as a direct reference to the film.

Sony believes the establishment threatens the continued success of Talledega Nights. Ricks Cabaret is said to be using intellectual property that is uniquely identifiable with the picture which would require proper licensing from the studio. Sony is seeking an injunction, restaurants profits, forfeit of web domain names and unspecified punitive damages. The studio has licensed Talladega rights to others in the past and insists that Ricks Cabaret should be no exception. Ricks Cabaret has declined to comment on the situation.