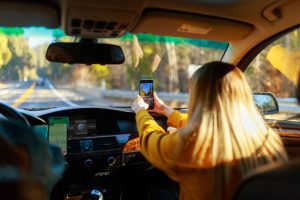 Keep your eyes on the road

In the United States, distracted driving is a growing problem. Among its many causes – from brushing teeth to changing clothes – texting is the worst offender. National Safety Council statistics show that texting while driving causes 1.6 million accidents and 4,015 deaths each year, and over 1,100 injuries daily. Ironically, a solution to this deadly problem lies with one of its main causes – the Apple iPhone.

In January 2017, angry consumers filed a class action lawsuit against Apple for failing to install a safety lock-out device on the iPhone that would prevent drivers from texting while driving. Since 2008, Apple has had the potential to install this safety feature on its phones. In 2014, the U.S. Patent and Trademark Office granted Apple a patent for the app. But given the choice between public safety and profit, it appears that Apple chose the latter. Since 2014, it has earned nearly $250M. In that same amount of time, over 415,000 California citizens have been harmed in accidents caused by iPhones.

The goal of the class action lawsuit is to prevent Apple from selling iPhones in California without the lock-out feature. Additionally, the suit seeks a court order requiring Apple to install the same safety device in its future products. It is unclear whether other states would prohibit the sale of smartphones without a lock-out device if the California suit succeeds. However, doing so could significantly cut accident rates, especially when combined with laws that ban or restrict cell phone use on the roads.

In addition to emerging state laws tackling distracted driving, several third-party companies have introduced products to make roadways safer. Currently, motorists can purchase add-on devices to their cellphones to make texting impossible when they start their cars. Some products also block the ability to access social media, take pictures, and send emails while the vehicle is in motion.

As the first of its kind, the outcome of this settlement is uncertain. Some lawmakers disagree that companies like Apple can or should be responsible for the safety of consumers using their products. They say distracted driving, the category under which texting falls, has many causes. Applying makeup, changing CDs, and reading books also take drivers’ attention off the road. If Apple is held accountable for its consumers’ actions, will product manufacturers, record companies, and publishers bear the same burden of responsibility? Only time will tell.