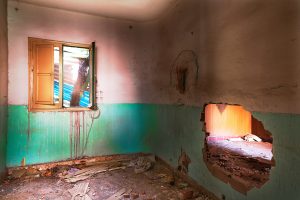 Brad Pitt is in the spotlight again, and the reason is something other than promoting a new movie. A lawsuit filed on behalf of several victims of Hurricane Katrina are taking action against Pitt and his charitable organization, Make It Right.  In an effort to assist those devastatingly impacted by Hurricane Katrina, Pitt’s foundation built homes to replace the structures lost in the hurricane.  According to the lawsuit, the homes constructed by the organization are quickly deteriorating.  Although many victims are left to live in homes that are apparently unlivable, Brad Pitt is denouncing all responsibility and involvement in the alleged neglect.

Originally filed in September 2018, the lawsuit names Brad Pitt as a defendant.  In Pitt’s defense, his lawyer argues that the plaintiffs have not provided enough substantial evidence to prove Pitt’s direct correlation to the inadequate construction of the homes.  The emotional turmoil endured by the homeowners is arguably not strong enough to establish Pitt’s involvement. Despite Pitt’s defense, a judge is siding with the plaintiffs and has denied Pitt’s November 2018 request to be dropped as a defendant.

While the victims are pointing the finger at Brad Pitt and his Make It Right organization, the named defendants are trying to pass off the blame to John Williams, the former architect assigned to the project. In this separate lawsuit, Pitt and Make It Right are seeking damages from Williams and his team to aid in the repair of the homes that are currently ruined in the Lower 9th Ward of New Orleans.

Some of the deterioration includes mold, plumbing and rotting wood issues, electrical problems, inefficient air ventilation, and structural damage.  The plaintiffs claim that the foundation was aware of the housing issues by 2013, however, it never made the homeowners aware of any defects.  Their main argument in the lawsuit is mental anguish, pain and suffering.  It will be left to the courts to determine Brad Pitt’s level of involvement and his foundation’s degree of negligence.