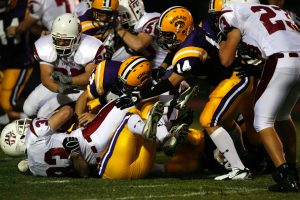 Peyton Manning is well known as the mature father figure of the National Football League. Unfortunately, the Super Bowl XLVI winning quarterback of the Denver Broncos has made unwanted headlines this week for his association with a 1997 University of Tennessee sexual harassment lawsuit. Dr. Jamie Naughright, former Director of Health & Wellness at the University of Tennessee, reported that Peyton Manning exposed himself to her while she was examining his foot in the locker room.  In his book “Manning: A Father, His Sons and A Football Legacy” Manning accounted the incident as a harmless locker-room exchange where he was “mooning” a fellow player. Manning called the event “crude maybe, but harmless”.

The incident was swept under the rug after the University of Tennessee settled with Jamie Naughright for $300,000 and she agreed to leave her job at the school. Dr. Naughright brought another lawsuit against Peyton and his father Archie Manning for defamation of her character.  This lawsuit occurred in response to the publishing of Manning’s book in 2003 where they called Naughright vulgar and proceeded to mail excerpts to her office in an attempt to ruin her reputation in the eyes of her peers.

Even though no charges stuck against Peyton Manning for the alleged sexual assault the incident has made many question the high-class reputation he has built.  Many sports fans and reporters revere the Manning family, as the first family of the NFL, which leaves us wondering, will leave a lasting stain on the Manning name?