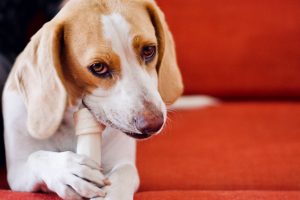 What you don’t eat can’t hurt you

The show may soon be over for Party Animal, which is the latest pet food manufacturer accused of product contamination. Party Animal is recalling several batches of its Cocolicious canned dog food amidst concerns that it contains barbiturate pentobarbital, a drug commonly used to euthanize humans and animals. Following a reported animal illness, the FDA sent samples from two Cocolicious batches for laboratory testing in Texas. The two samples tested positive for pentobarbital, prompting a national recall. The recall, issued on April 24, 2017, includes the 13 oz. Cocolicious Beef & Turkey dog food from Lot 0136E15204 04 (“Best by” date July 2019) and the 13 oz. Cocolicious Chicken & Beef dog food from Lot 0134E15 237 13 (“Best by” date August 2019).

Pentobarbital, a respiratory depressant, is very toxic. When consumed by an animal, pentobarbital causes diverse, potentially life-threatening symptoms. Trace amounts cause dizziness, lethargy, and loss of balance, while higher doses result in coma, collapse, and death. The drug is believed to enter the pet food supply chain through the process of rendering, which reuses certain animal parts for “feed-grade” foods and non-consumable products including soap, candles, and leather goods. Rendered tissues harvested from animals euthanized with pentobarbital (including cattle and horses) raise the risk of contamination.

Because of the widespread use of rendering, the Cocolicious incident is not the only time pet food has sparked a pentobarbital scare. On February 3, 2017, Evanger’s Dog and Cat Food Company, based in Illinois, recalled several lots of its canned Hunk of Beef dog food after receiving reports of acute canine illnesses following consumption of its goods. The dogs, who belonged to a single household, displayed sudden and severe neurological symptoms after eating the dry dog food. One animal died and the rest are undergoing treatment.

The first incidences of pentobarbital toxicity date back to the early 1990s. Over the course of 10 years, veterinarians nationwide documented reduced effectiveness of pentobarbital in canine patients. Their reports cited suspicion of pentobarbital contamination in pet food, which prompted the FDA’s Center for Veterinary Medicine (CVM) to launch an investigation in 2002. The CVM’s report found little to no risk for food contamination from pentobarbital, but recent events have proven otherwise.

Rising incidents of animal food poisoning are rightfully concerning pet owners. In the short term, consumers who have purchased products in either of the tainted Cocolicious lines may return the products to the original place of purchase for a full refund. They can also reduce the risk of pentobarbital poisoning by feeding pets human-grade food, which is held to stricter safety requirements. It is unclear yet what additional legal action will stem from this incident, but it is apparent that tighter industry regulations are needed.