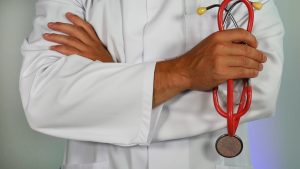 An $8 million settlement will be divided in September or October of this year for the 43 patients-turned-victims who are suing Michigan oncologist Farid Fata for fraud and money laundering charges.

Fata allegedly subjected at least 553 patients to unnecessary treatments over several years through his oncology clinic, including chemotherapy treatments to some patients who did not have cancer. That clinic along with Crittenton Hospital, McLaren Health Care Corp. and St. Joseph Mercy Health System, will pay the settlement award.

“While this settlement will never change the devastation suffered at the hands of Dr. Fata, we hope it brings about some justice for the patients and their loved ones who struggle with this tragedy every day,” Crittenton Hospital’s statement read.

“St. Joseph Mercy Oakland’s involvement with these patients, the lawsuit and settlement was minimal and no findings of responsibility were made. However, we believe participating in this settlement is in the best interest of our patients and the community.”

“Unfortunately under these circumstances and under Michigan Law, Fata’s victims were never going to receive fair levels of compensation…It is outrageous (that) doctors are allowed to practice with inadequate insurance and hospitals can distance themselves from liability.” states attorney Brian McKeen, managing partner of McKeen & Associates and co-lead counsel for the patient-victims.

Fata plead guilty to criminal fraud and money laundering charges in 2014, admitting in federal court that many of his patients did not need chemotherapy treatment and that the government could prove he received at least $17 million from two insurers for these services.

McKeen also stated that Fata’s insurance policy had exclusions for willful and fraudulent acts, so “there was a very real possibility that the insurance carrier would be allowed to walk away” if no deal was reached.

Jules Olsman, president of Olsman MacKenzie & Wallace and co-lead counsel for the patients, said the individual hospital contributions towards the settlement fund were confidential, but that each hospital’s fund is expected to address the patients treated at its facilities.

He also noted since Fata’s limited insurance and all medical malpractice cases are governed by tight caps on non-economic damages under Michigan tort reform laws it was very difficult to explore the extent of the hospitals’ roles in his scheme.

“It’s the best deal that could be reached under, frankly, the shackles of what we have to work with in this state,” Olsman said. “Is this the most equitable result or deal for his patients? No. But it’s the best possible result.”

In addition, the 43 patients are also asking U.S. District Judge Paul Borman to set aside more than $10 million that federal officials expect to recover in Fata’s criminal case, to cover “out-of-pocket” expenses of victims.