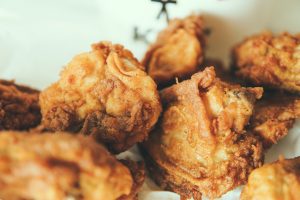 An employee’s decision at a popular fast food chain might fry the whole franchise.  Charles Hernandez, a veteran of the Iraq War, was denied service at a KFC in New York after attempting to bring in his service dog. He is filing a lawsuit for $1,000,000 in Manhattan Federal Court.  Hernandez uses his dog, Valor, to help alleviate his post traumatic stress disorder (PTSD), which includes night terrors and other panic attacks.  The Americans with Disabilities Act (ADA) allows any American to bring their service animals in any establishment or location.

Mr. Hernandez, who also worked at Ground Zero after 9/11, walked in to the KFC on Fordham Rd in The Bronx and attempted to place an order.  The employee behind the counter reportedly informed him that dogs were not allowed in the restaurant.  Hernandez mentioned the ADA, but still was not allowed to purchase food in the fast food chain.  He has gone on record saying his disability is often questioned, as he has no visible deformities or injuries.  David Lackowitz, the lawyer representing Charles, is citing federal, state, and city laws related to this occurrence of “ignorance and discrimination”.

Interestingly enough, Charles Hernandez won an unreported amount of money in a settlement with McDonald’s in 2011, rumored to be somewhere below $4 million.  The details of that event are a little more extreme than that of the KFC situation, however the end result is the same.  PTSD is a serious plague to many people, especially those who have served in armed forces.  KFC has gone on record saying they are aiming to comply by all U.S. laws and regulations.  It appears Valor, who is a black lab/Great Dane mix, has a nose for fast food.