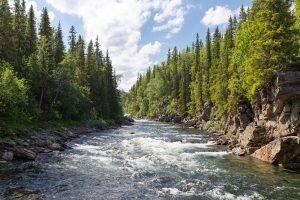 In the Intermountain West, water law follows the Doctrine of Prior Application, which means “First in Time, First in Right.” This doctrine has led to stiff competition for water usage, and water ownership is highly coveted. For years, water flowing through the town of Missoula, MT has been owned by Liberty Utilities. But now, after years of fighting for ownership of its water supply, Missoula is finally winning. A settlement agreement was recently approved by town council members, setting the stage for a transfer of ownership on June 22. With a successful transfer, Missoula will become the last town in Montana to own its own water system.

Since the 1980s, Missoula has fought a losing battle against the state for control of its own water. In the 1980s, the Montana Supreme Court blocked the city’s efforts to control its water supply. But the court sided in unprecedented favor with Missoula in this week’s hearing; a 5-2 ruling in favor of having Liberty Utilities relinquish its ownership secured full ownership for Missoula. The decision was influenced by statements from town officials concluding that the cost of water in Missoula under third-party ownership was the highest out of any municipality in Montana. Steep water prices were attributed to costs incurred for Liberty Utility employees’ travel, staff salaries, and a board of directors fee. Inflated prices are not unusual according to Food and Water Watch, which reports that investor-owned utilities can charge up to 33 percent more for water than local government utilities.

The decision to own its water supply has certainly come at a cost for Missoula. In total, the town paid Liberty Utilities $83.8M for the transfer, and spent a grand total of $93.2M when legal fees and developer’s fees are added in. Despite the cost, however, Mayor John Engen of Missoula is excited for the change. He contends that with Missoula owning and regulating its citizens’ water, the price of water for residents will drop. Furthermore, Missoula will contract with a local utility to manage the water supply, which means there will be considerably more accountability and oversight than with the more distant Liberty Utilities. Missoula’s fight for water ownership drew considerable support from the public, as residents look forward to paying fair prices for a basic necessity.

At present, it will take Missoula approximately 20-30 years to pay off the cost of its acquisition. But the financial sacrifice, town leaders say, was worth the benefits to its citizens. With all of its city water supplies now publicly owned, Montana can ensure safe, reliable, and affordable drinking water for all.