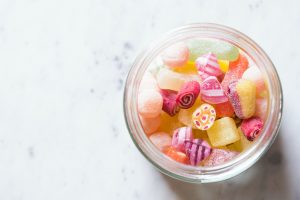 When Candy Crush is being mentioned, insistently everyone’s thinking about the addicting puzzle game. No one would ever come to a conclusion of candy literally crushing you. Beth Flickinger experienced 25 pounds of M&Ms piling on top of her head due to the malfunction of the candy dispenser and had filed a personal injury lawsuit. Flickinger’s only motivation during the accident was to catch the dispenser so it did not harm her two kids that were with her at Toys R Us, located in New York City’s Time Square. She was successful in protecting her kids, but the 42-year-old claims she suffered severe headaches, twisting her neck causing a herniated disk, loss of income, and apparently affected her sex life.

The couple, Beth and James, were aiming for millions of dollars due to the damages. Unfortunately Trade Fixtures, the maker of the candy dispenser, displayed good reputation by showing that 50,000 of the dispensers have maintained delivering candy for seven years without any problems. The couple reached a settlement for an undisclosed sum with the maker of M&Ms. Trade Fixtures found a clever way to defend themselves by presenting a photo of Beth Flickinger on vacation in Puerto Rico shortly after the accident. The picture showed her “sitting at the bar… all gussied up.” With that being said, Beth mentions “Our family and friends know the truth and that’s what counts.”

For the Flickingers, the weekend was planned full of activities; the family did not plan to have to file a lawsuit. Beth showed no interest in filling out a report for her injuries until six months after the incident. Additionally, an employee at Toys R Us claims that one of her sons was responsible for “yanking” on the candy dispenser; meanwhile the family disagrees. For future reference, next time for anyone that returns to Toys R Us, they should probably avoid the M&Ms candy dispensers for their own safety. Perhaps Candy Crush is better left for the smartphones.