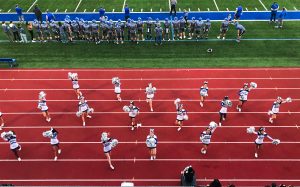 An overworked and underpaid lawsuit has just reached a settlement as the New York Jets Cheerleaders are being further compensated for their time on the field. Around Fifty-Two Jets Cheerleaders from the 2012 and 2013 seasons alleged that they were largely underpaid. The Jets cheerleaders were purportedly paid $150 per game, and were not compensated for any practice time. The cheerleaders lawyer Patricia Pierce commented on the matter, explaining to CNN Money “When you factor in the required hair, makeup, and transportation expenses, the hourly rate goes below $1.50 an hour”.

The settlement is awarding a total of $324,000 to the former cheerleaders. Broken down, each girl is being paid around $2,500 for each season they worked. The end amount of monies each cheerleader receives will ultimately depend on the number of seasons they worked as well as any photo shoots. Any girl that was involved in a photo shoot may be eligible to receive an extra $400 for each shoot.

The Jets cheerleaders are just one of multiple squads to file a lawsuit against their NFL team. The Tampa Bay Buccaneers concurred to pay their cheerleaders a total sum of $825,000 in their settlement last year. Similarly, The Oakland Raiders came to a $1.25 million dollar agreement with their cheerleaders in September of 2014. The Jets proclaimed that they “Deny the claims and the parties have agreed to a settlement to avoid the expense, time and distraction of litigation.”