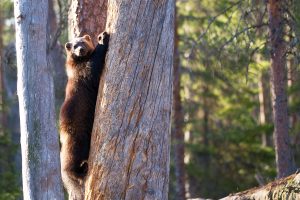 This is not the first battle fought against the US Fish and Wildlife Service, as a previous lawsuit was filed in 2016 after a proposed listing to protect the wolverine was extracted from consideration.  The agency provided a deadline of November 2019 to make a decision, but it failed to follow its own goal of solidifying a resolution.  Refusing to let the matter alone, the new lawsuit was filed on behalf of the Center for Biological Diversity, Conservation Northwest, Defenders of Wildlife, Friends of the Clearwater, Greater Yellowstone Coalition, Idaho Conservation League, Jackson Hole Conservation Alliance, Klamath-Siskiyou Wildlands Center and Rocky Mountain Wild.

As the world’s climate becomes warmer, the snowpack shelters for the wolverines diminish and become scarce.  Part of the weasel family, these animals require the snowpack in order to reproduce.  The main issues with the declining wolverine population are not only environmental, but also societal.  Humans impede on the habitats of the animals by building roads and developing land.  It would be difficult for the remaining 300 wolverines present in Idaho, Montana, Oregon, Washington, and Wyoming to fair the elements alone, without the protection of organizations that do not want to introduce another extinct species.  The lawsuit intends to legally push the US Fish and Wildlife Service to do what is right before it is too late.