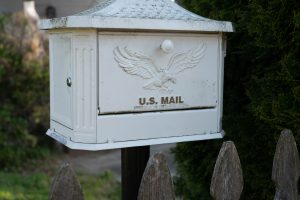 Three days after closing in June 2014, Derek Broaddus and his wife Maria began second guessing their $1.3 million purchase of 657 Boulevard in Westfield, New Jersey.  One typed note placed in the Broaddus’s mailbox served as the catalyst to a string of odd events that eventually led to a lawsuit filed against the previous homeowners, John and Andrea Woods.  Although the family’s horror movie started over four years ago, the story is most relevant now because everything is being disclosed, including the contents of each of the four letters sent to the Broadduses by “The Watcher.”

To some, the message in the first letter from The Watcher is just creepy, but does not appear to carry much weight in credibility.  To others, like the Broaddus family, the first letter, which includes, “Why are you here? I will find out,” causes a reaction of uneasiness or paranoia.  The author of the letter proudly unveils a history of onlookers of 657 Boulevard, starting with the grandfather in the 1920’s, and ending with his/her current position as The Watcher.  When The Watcher referred to the three Broaddus children as “young blood” and mentioned being pleased with the Woodses for bringing the children to the home upon request, Derek Broaddus notified the authorities.  An investigation commenced, but to this day, the identity of The Watcher remains unknown.

A year after buying the home, in June 2015, the Broadduses took legal action against the Woodses, with the hope of reaching a settlement that would not attract too much attention.  The home may be harder to sell if the general public learned of the occurrences at 657 Boulevard.  According to the lawsuit, John and Andrea Woods admitted to receiving a letter from The Watcher before moving out, but did not pay any mind to it before throwing it away in the trash.  The Woodses only mentioned a similar theme in their letter, that The Watcher’s family had been looking after the home through a few generations, but assured the new owners that they had never received another letter in the 23 years they resided in the home.

The Broadduses argued that if they would have known the previous family received a letter that was potentially concerning, then they may not have purchased their new home.  The lawsuit did not end well for the Broadduses, as a judge dismissed their case.  In some states, sellers are required to disclose unique conditions to the buyers such as deaths in the home or hauntings, however, New Jersey is not included in the list of states that enforce this requirement.  Unfortunately, out of fear, Derek and Maria Broaddus and their three children never moved into the home, and only renovated the interior of the home.  The family placed their dream home up for sale, where it remains on the market today.