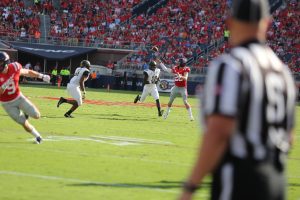 The saga of deflated footballs and a certain A-list quarterback have not left headlines since the winter of 2014. Now, months later, we are all following the twists and turns of the story, including NFL Commissioner Roger Goodell’s attempt to keep Tom Brady off the field in September. This seemed to be the final straw for Brady and Patriots Owner Robert Kraft to fire back at Goodell and the NFL, opting for a New York courtroom over the sunny, green fields of Foxborough, MA. There are several undertones here, including the NFL Players Association’s potential second thoughts about granting Goodell his current power, plus the Commissioner’s personal relationship with Kraft. How did letting air out of a football lead to a corporate showdown and legal dispute, centered around a high profile athlete?

As the story goes, Brady and the Patriots had been accused of tampering with game balls at half time during a playoff game against Indianapolis. Reports have since leaked that Brady prefers the footballs to be a little deflated, under the regulation PSI (pounds per square inch), and had New England sideline personnel illegally remove the balls from the field to prepare them to the quarterback’s liking. The Patriots went on to win the Super Bowl, but the NFL investigated the incident in the off-season, ultimately deciding to penalize the Patriots by forfeiting their 1st rd draft pick and suspending Tom Brady for the first 4 games of the next season. Brady, completely denying everything from Day 1, came back and sued the NFL. While many assumed he had no chance to win, insufficient preparation and lack of evidence (Tom Brady destroyed his phone before being investigated), may lead to an injunction being filed, meaning Roger Goodell loses and Tom Brady gets to play week 1.

And here we are. This entire situation is about as ridiculous as it sounds. Tom Brady undoubtedly had those footballs deflated, based on subpoenaed text messages between the Patriots Equipment personnel, one of whom was nicknamed “The Deflator”. Obviously he didn’t destroy his phone for fun; there must have been a reason. In Brady’s defense, an NFL-led investigation isn’t binding in court. However, now that they’re actually in court, things are surprisingly leaning towards Brady’s camp. If the sport’s commissioner can’t suspend players and fine coaches / organizations for breaking the rules, then there is clearly a problem. But at the end of the day, the only thing the NFL, NFLPA, Brady, Goodell, and all parties involved have in common is the love the of the dollar. As long as footballs are being deflated, and not back accounts, there will be no real damage done.