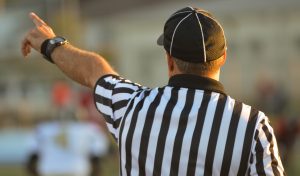 The intensity surrounding the referee lockout seems to have increased dramatically since last night’s GAME WINNING Hail Mary “catch” by Golden Tate.  In the final seconds of what was otherwise a fairly droll match up between Seattle and Green Bay, Wilson hurled a desperate final pass into the corner of the end zone.  As Packers Safety M.D. Jennings and Seahawks Wide Receiver Golden Tate came down both possessing the ball (80% Jennings 20% Tate) the referee signaled for a touchdown.  This was under the stipulation that in the case of “simultaneous” possession, the catch is awarded to the offense.  As all scoring plays are reviewed with the most sophisticated slow motion technology known to man, the world assumed the replacement refs would catch their mistake and reverse the horrible call.  But unfortunately simultaneous possession is not a reviewable call.  The game will go down in the books as a Seattle win over the Packers.  But this touchdown call will go down as one of the worst and most influential on field decisions in NFL’s history.

It is important to keep in mind that these replacement referees are not at fault for the missed and wrong calls happening throughout the league.  These are former Social Studies teachers and Lingerie Football League officials out on America’s biggest stage, doing the best they can.  But trying telling that to those who bet on last night’s game.  “The shift was 100%.  After the Seahawks score, all bets were reversed” leading to an approximate $200 million swing on the bet.  The outcome of last night’s game must have put Goodell’s feet to the fire over the referee lockout.  Especially since Twitter is now buzzing with death threats.

One thought on “NFL Up For Grabs?”