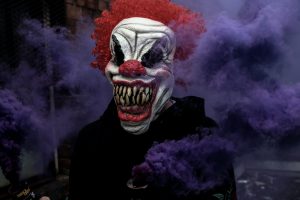 Insane Clown Posse has created their own style of hardcore hip hop known as horrorcore, a genre that authorities have labeled and confused the members of the fan base as violent.  The duo are worried that the FBI list will hurt their fans in matters regarding the law.  If a fan finds himself in trouble he will automatically be branded a gang member because of his affiliation with the Juggalos.  In spite of these allegations against them the Juggalos have created a website and forum to report any unjust treatments by the law enforcement in order to bring forth evidence against the FBI.

I’m all for the ICP’s decision to file a lawsuit against the FBI.  The FBI is defaming the whole Juggalo following.  Why not put Justin Bieber fans on the National Gang Threat Assessment?  They are just as crazy and intense as Juggalos, if not worse.  In fact, I would be more worried about a group of teeny boppers at a Bieber show than a mosh pit at a Juggalo gathering.  Yeesh!  That’s a scary thought.  No doubt they will keep fighting against the government because a family that plays together stays together and this family is not backing down.