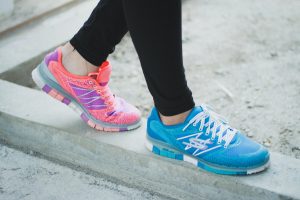 I couldn’t find free-to-license pictures of Shape-Ups, but just imagine regular running shoes with a grotesque protuberance out the bottom.

If you believe wearing a specific shoe without committing to some aerobic or at least extra exercise is somehow going to transform your body from flab to fab, then I’ve got some snake oil to sell you.  Nevertheless, shoe company Skechers (sic) made just that very claim with their line of “workout” sneakers called “Shape-Ups”.  According to the marketing for the shoe, buying this particular brand will by virtue of wearing it work out and “tone” your legs, leading to fat loss and muscularity and all-around healthiness that you will not otherwise attain without the discomfort and strain of actually working out or being all-around healthy.  The company conducted some tests and studies (by well-paid scientists-for-hire) that seemed to support this concept, and produced celebrity endorsements by the likes of quarterback Joe Montana and socialite Kim Kardashian, who claimed that the shoe was so beneficial that she abandoned her personal trainer altogether, relying entirely on the shoe as a sort of workout God-figure.  Surprise surprise, the shoe did not live up to its expectations, and the Federal Trade Commission subsequently sued Skechers to stop spreading nonsense.  Today, the company will pay about $50 million, some of which is in fines and most of which will go to reimbursing dissatisfied customers.  And, of course, the company will have to change its marketing significantly when it reintroduces the shoe next year.

I suspect readers of this blog have a brainstem, and so your eyebrows are probably at least half askew with doubt from reading those claims.  One should be skeptical not only of a serious health product company using the word “tone” as a verb without a soupçon of irony, but also of a shoe that magically vaporizes fat.  I scratch my head as to why anyone with familiarity with footwear would believe such a ridiculous claim, but then again, I’m often amazed at what people will buy in their desperation to get healthy.  “Toning footwear” turns out to have been at one point a $1.1 billion-a-year industry.  Last year it dropped to about $500 million, which I’d guess is either because “toning shoes” is hogwash or because Reebok was hit with a similar lawsuit just last September (which they settled for $25 million).  Either way, they’ve shown that there really is always a market for dumb workout products.

I’ll just state for the record and definitively:  the only way to lose weight and build muscle is to regulate your diet with healthy, varied food and to actually work out to the point of sweating.  This process is difficult and takes as much time as it did to put on the weight in the first place, which is why so many people look for an easy way out (e.g. via footborne panacea).  A specific brand of shoe will never replace this method.  If footwear improves or supports such an endeavors is another question, one which I will not go into (except to say that if you’re doing it right, said support is negligible), and one which the average consumer of “toning shoes” is not concerned with in the first place.

The key problem in this case, in my eyes, is that the average consumer of this shoe was not looking for a supplement, which is what Reebok’s mercenary scientists’ studies seemed to suggest, but for a replacement.  And in that regard, the shoe is a miserable failure.  And when a product fails at what is perceived as its purpose due to aggressive and misleading marketing of said purpose, litigation ensues.

If you happen to be rocking Shape-Ups right now and are thoroughly enraged both by the settlement and my flippant attitude towards your buying motivations, you can learn how to get some of your money back here on the FTC’s government website.

With all the fuss and expense concerning footwear, maybe it’s better to just forego shoes entirely.  To learn about the benefits of running barefoot check out this extremely scholarly analysis.  And to buy footwear that isn’t that dumb and actually kind of makes sense if you think about it from the point of view of ancient footwearless hunter-gatherers, check out Vibram FiveFingers (sic?) here.