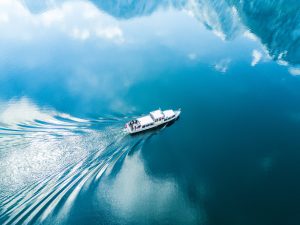 Though it walks two worlds, it is a master of none

A duckboat is a particular kind of bus that can travel by both land and sea.  Typically seen in cities like Philadelphia and Boston, which have prominent and accessible rivers, the boat/bus hybrid is particularly useful for tour companies, the novelty of amphibious sightseeing being extremely attractive to tourists.  Rarely do these duckboats cause a problem.  Their pre-planned and short water routes don’t get in the way of bigger ships, and on land they operate just like normal buses.  Back in July 2010, however, bad luck and negligence conspired conspired to end this reputation of relative safety.  A duckboat stalled in the water.  A tugboat captain pushing a barge turned down his emergency radio and looked away to answer a phone call.  The two vessels — one helpless, one aimless — collided.  The duck boat tumbled underneath the barge, bringing two Hungarian tourists to a watery grave.  Yesterday, after two years of negotiations and court maneuvering, lawyers associated with the case announced that they had reached a settlement with the tug- and duckboat companies.

Most of the delay in this settlement was because lawyers for K-Sea Transportation, the tugboat company, and Ride the Duck, the duckboat company, argued that a maritime law from 1851 applied in this case, limiting the liability to the value of the vessels, or about $1.8 million total.  Further complication rested on who to blame.  The captain of the tugboat, who took his eyes off the water and turned down his emergency radio to answer a phone call, so that he couldn’t hear the duckboat’s mayday distress calls?  The duckboat, which broke down in the middle of a busy shipping lane and did not have proper emergency procedures in place?  The city, for allowing passenger tourism vehicles to operate in freight lanes in the first place?  However tragic, the case was shaping up to be interesting from a legal standpoint, seeing as how amphibious vehicles are a sort of nebulous entity in terms of road v. water law enforcement.

The answer to at least one of those questions is clear, though: the captain of the tugboat was sentenced in November to a year in prison for what is, in maritime law, the equivalent of involuntary manslaughter.  That decision, along with the actual, horrifying video of the accident, likely weakened the boat companies’ argument, which in my opinion may have influenced the negotiations of this settlement.  All told, the families of the two Hungarian tourists will receive $15 million, with an additional $2 million going to the other 37 passengers of the boat who survived with only minor injuries.  Ride the Duck’s tours in Philadelphia have resumed, albeit with a shorter water route — still, this landlubber’s not going to take his chances.