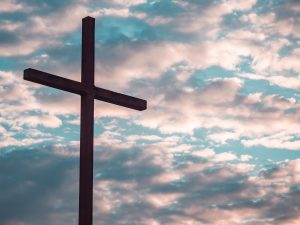 There was something about the Mojave Desert for the Lost Generation.  Maybe it was the cool sand-crested wind, the emptiness, an unspoken communion with a greater peace.  Those disillusioned soldiers of World War I, still shellshocked, went out there to find quiet — to forget, maybe, or to remember in silence only the stars overhead could provide.  In 1934, perhaps because of these troubled men, the Veterans of Foreign Wars built a wooden cross and raised it on a quiet parcel of land there.  It was both memorial to the soldiers lost and a reminder to those still living of the enormous cost of the war.  The veterans gathered at the cross for barbecues and dances, to come together and share their burdens in the cross’s shadow.  It stood there for 67 years, rebuilt with steel at one point, becoming a defining monument for veterans everywhere — separate, in a way, from the religious connotations inherent in the cross’s image.  Henry and Wanda Sandoz looked after it, on a promise to the previous caretaker on his deathbed.  The cross remained, stoic and silent, until 2001 when a church-and-state lawsuit threatened to take it down.

The problem was that the cross was built on land that later became part of the National Public Reserve.  As any constitutional scholar will tell you, there is a major problem with government entanglement in religion, even if unintentional.  In this case, the cross was put up by a private entity 60 years before the Mojave Preserve even existed, its purpose memorial, its religion incidental.  In 1999, the National Park Service planned to take down the cross, but was forbidden to use public funds to do so by Congress.  In 2001, a former park service employee supported by the ACLU brought suit to remove the cross on church-and-state grounds.  The suit simmered for 11 years.  In 2003, Congress suggested simply giving up the land to a private party.  However, this was blocked by an appeals court.  In 2010, that appeal was overturned and now, this very Monday, the land will be ceded to the Sandozes, who will in turn give the parcel to the VFW.  Finally, the memorial will live on, unimpeded, on a small section of private land within a federal sanctuary.

The separation of church and state is an important facet of American freedom.  Its purpose, of course, is to prevent the enforcement by the government of any particular religion on the people.  Government money cannot support a church, for instance, or be used to build a cross on the White House.  In fact, organizations like the ACLU rigorously defend this idea when the government gets a bit out of line — you’ll see it in the papers all the time.  But what about this incident?  The Mojave Cross was built by war-weary veterans 78 years ago for the sole purpose of memorial.  It did not preach, it had no pulpit, and wasn’t actually on government land until 1994.  No one could say with a straight face that it was irrefutable proof of government endorsement of religion.  Congress’s solution in this case, to remove government involvement by just giving the land away, was an elegant one.  It reminds us that, while separation of church and state is important, so is history and so is memory.